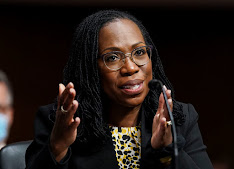 Below is an episode from OnPoint Radio, a daily talk show from WBUR Boston, discussing the hearings presently going on concerning the hearings related to appointing Judge Kentangi Jackson to the Supreme Court. If you are only going to listen to one show on Public Radio, OnPoint should be it.
Post a Comment
Read More

With China agreeing to ignore Russia’s aggression, thus giving Putin the green light to attack Ukraine, we need to find and support an alternative to buying from China. China is more than willing to cause turmoil in western countries by pitting one country against another. I guess China assumed no one would notice. Well, there are some in the west who have noticed.  Also let’s understand that China still considers Taiwan to be a part of China, with some justification. When the time is “right” as determined by China, they will make their move. In fact, China has been making there move for some time.  We can do this by encouraging countries in South America to utilize their relatively cheap labor to produce the goods and services we now purchase from China. China takes for granted that Americans will continue to buy Chinese because of price.  South America can compete with China by us committing to buy from South American countries instead of China. With that committment we will not on
Post a Comment
Read More
More posts