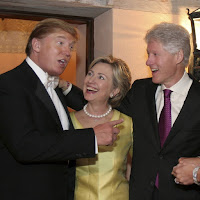 If I were to ask you to name three national political figures that are more conniving than Bill Clinton, Hillary Clinton and Donald Trump you would be hard pressed to do do so. The three of them off the national stage are good friends. Bill and Hillary I believe attended Trump's wedding. Trump has been a big contributor to the Clinton Foundation. Hillary Clinton has said very little about Donald Trump's quest to become the GOP Presidential candidate. I find that odd. There is no one on the national scene who has coveted the presidency more than Hillary Clinton.


I have an image of the three of them sitting in a cocktail lounge somewhere in the United Arab Emirates  drinking some fine scotch scheming as to how to get Hillary elected President  of the United States.  What better way than to somehow make a mockery of the GOP. It would be hard to dispute that the GOP debates have substantially lowered the bar for running for President of this country.

I know some of you are thinking I also have been drinking too much scotch, but a much less expensive brand, and also at an abandoned hotel somewhere in Flint rather than the United Arab Emirates. At the same time, you have to agree that anything is possible in this election cycle and all three of them, Hillary, Bill and Donald have the gonads to try it.
Campaign 2016 Clinton Trump