- December 15, 2018
Picture yourself as Trump. All of your life has been privileged.  You got everything you desired. You got away with every nasty thing you did. Your Dad trained you in unscrupulous ways. You are one of the wealthiest men in the world and one of the most vile. 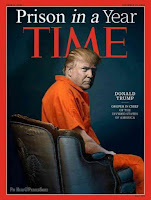 Today you are being investigated  by the FBI facing the possibility you will be removed from office and spend time in prison. The person overseeing your investigation, Robert Mueller, is  relentless. You do not intimidate him. You don’t dare offer him a bribe. His supporters are not backing off. Your previous employees are turning state's evidence. You recognize there is a likelihood impeachment hearings will be brought against you.

Trump prides himself as a deal maker, but who does he make a deal with? Who can he trust? He knows he cannot trust Putin. He realizes Putin has “out trumped” him. Trump knows he will be fortunate to leave the presidency without being in a prison jumpsuit.

Trump is accustomed to getting his way. Not this time. There are a few good men in our system that cannot be bought, threatened or bribed and Mueller is one of them. Trump’s options are few. He can skip out to his condo on the Volga but he cannot trust Putin. He may have an accident. If he stays in the United States his suits will be orange matching his hair.


The good news is the United States will have a happy ending to this dark time in its history in 2019. Trump will be gone.  Voters let us not forget the Republican Party. The GOP let this vulgar man take control. It also must be punished for its complicity. Further,  Citizens United allows  politicians to focus on money rather than voters and needs to be repealed. We need to get back to one man, one vote rather than $100,000, one vote.