Our nation has improved in handling and accepting different races. However race still does matter as to how someone is treated by society. Much of the discourse over race has to do with results, or lack of results, relating to justice and equality.Since the 1960's this country dedicated a lot of resources to eradicate racism. Progress can be acknowledged, but we have not eliminated racism. This is today's frustration on the part of both white and black citizens.Whites, as a group, feel enough is enough. We have thrown resources at fixing the problem but it still lingers. Blacks still get up every morning living in inferior neighborhoods and sending their children to inferior schools and they want change. Now that the world has recovered from World War II its harder for us as a nation to remain “King” of the world. We see our kingdom slipping in stature and many whites are thinking: "enough is enough for we poured billions of dollars into trying to lift blacks out of poverty and despair and they squandered the resources." We effectively played Pontius Pilate washing away our guilt.

What we fail to take into account is we, our white government,, failed in the implementation of a plan to remove segregation, prejudice and injustice. Rather than accepting our failings we blame the Negro. The truth is both races are the blame. Someone once said in order to fix a problem the problem must be recognized.  It is time both races recognize the problem.The reason for today's failures goes back to how this country is organized. Unlike a private business, our government holds no one responsible for attaining results other than at the ballot box. In between election cycles those in government are left alone accounting to no one except those financing their campaigns and sending them on junkets.


No one pays attention to progress in attaining results in between elections.A private business has a Chief Operating Officer and a Controller to see to it that the plan adopted by the Board of Directors is organized to efficiently accomplish objectives. This function is lacking in government and only relies on the ballot box every few years to hold our elected officials accountable. This is no longer acceptable given the Supreme Court ruling on Citizens United, which allows citizens and entities to buy politicians who eagerly hold out their hands. 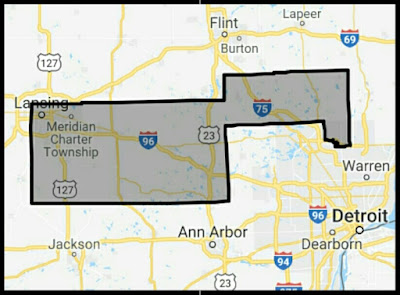 Gerrymandering, which allows political parties to carve up congressional districts to optimize their political clout is also a culprit. Above is how Republicans in the 8th district in Michigan used gerrymandering to maximize the voting power of one political party instead of drawing districts based on geographic proximity and other rationale means..

The President, Congress and Senators are too busy raising money to stay in office to address the problem. Government needs a COO, Chief Operating Officer and/or Controller to measure and optimize results. Instead, once laws and regulations are passed no one pays attention and they move on to raising money and passing new laws, in that order. Until this is fixed not much will change. Gerrymandering is implemented because those in elected office report to those who provided large contributions to the office holders campaign under the law upheld under the Citizens United ruling of the Supreme Court.