- March 14, 2016
Here is one of the great quotes from one of our most famous Presidents.

The above is a quote by President Abraham Lincoln that we all learned in grade school. It is one of the basic principles under which we are governed. Below are the people involved in creating and implementing the Grand Bargain in Detroit, including the city in which they resided at the time of the bankruptcy. 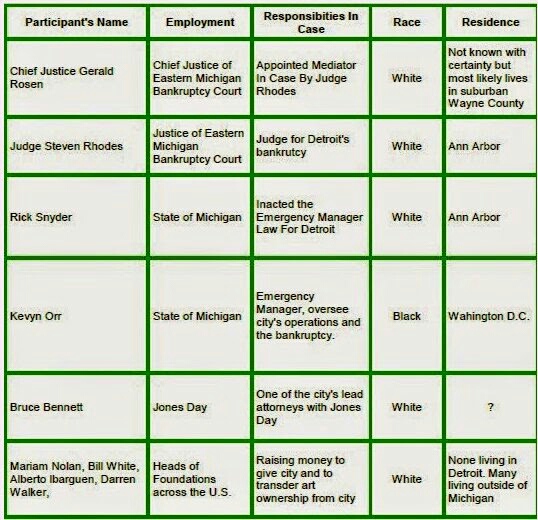 None of them resided in Detroit and yet they made the decision to give away billions of dollars of art owned by the city for pennies on the dollar. They made this decision knowing full well that after the bankruptcy was completed the city and it's school system would still be under severe financial stress.


No one has yet provided a good explanation of why this was done. An explanation that I heard making the most sense is many of the patrons of the Detroit Institute of Art were also large donors to the Republican Party including the Governor!


Does anyone have a better eplaination? Isn’t it time to investigate this decision and put it to rest once and or all? The state legislature is complaining about the amount of money being allocated to Detroit to fix the problems, but I hear no one in Lansing complaining about the Great Art Heist.