The U.S. and China: friends or foes

Chinese have been around from 500 years before Christ. They think of themselves as a civilization. The United States has been around for only 240 years. The citizens of both countries are proud of their heritage.

For thousands of years China called themselves the “Middle Kingdom”, meaning they were the center of civilization and all other countries and cultures were inferior to theirs. For much of China’s history they did not pay close attention to the rest of the world. They believed that non-Chinese were barbarians and they had nothing to learn from them. 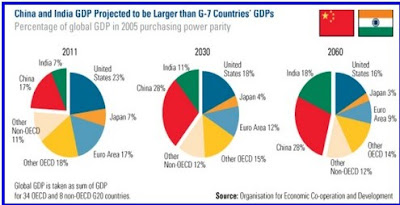 Up until the mid 18th century China had no interest in conquering other lands. When they visited other parts of the world China was not out to conquer. They accepted gifts from the barbarians and had no interest in ruling them. Often they would invite the barbarians to visit China and provide gifts, called tribute, to the Emperor of China. The Chinese explorers would leave in peace believing they had nothing to learn from others. This attitude was costly for China.

In the mid 19th century China was embarrassed by the west losing several wars with Britain and Japan. The Chinese were no match for ships powered by steam and weapons that spit out led projectiles from afar, out of reach of Chinese swords. The Chinese are now determined not to let this happen again. Projections are by 2023 China will have more college graduates in its workforce than the total workforce of the United States.

China has a long history and long memories. The Chinese are a patient people including their leaders. They remember well the above "Lost Century" dating from the mid-19th century and ending after World War II in the mid 1940's. Much of this humiliation came at the hands of western powers. The question is can they forgive and become a true trading partner.

In the 19th century Americans believed they had a “Manifest Destiny”, meaning their settlers were destined to expand throughout the continent.

Americans also believed they had special virtues and their mission was to remake the image of the west of their new country into the image of agrarian Americans on the east coast of the continent. This was done without regard to Native Americans. Today many of its leaders refer to this belief as “American Exceptionalism”, meaning they are destined to be the leader of the world and the rest of the planet should accept this as fact. A question unanswered is can America accept China as an equal. America looks at itself as being blessed by God in an “exceptional way”.

A significant difference in the two countries is Americans define long-term as being an election cycle while the Chinese tend to think of a decade as being a short time frame. The Chinese create 10-year plans and the United States has a hard time creating a one year budget.

In the not too distant future China, along with India, will become more economically dominate as pictured in the above graph.

In less than 50 years China and India will comprise 46% of the world's GDP, while the United States economy drops from 23% to 16%. How will the United States react to the fact that the concept of American Exceptionalism will be badly bruised? Will China once again look at itself as the Middle Kingdom but this time be less passive with the rest of the world?

Will the United States take aggressive action to maintain its belief in American Exceptionalism by trying to impose another “Lost Century” on China? The answer to these questions will become clear in the next quarter century.