Detroit's bankruptcy: Where was the press?

- December 26, 2014
Almost a year ago we asked the question of where was the press as the city of Detroit was in decline and with much corruption and mismanagement for the past ten years or so. Unfortunately we need to ask the same question once again. The city’s bankruptcy was recently wrapped up with the result being the net worth of Detroit declined as a direct result of this legal action. This is not supposed to happen.

At the crux of the issue is the art held at the Detroit Institute of Art having a value somewhere between $4.8 and $10 billion dollars. Prior to the bankruptcy it was generally believed to be owned by the city. As a part of the Grand Bargain, which was the centerpiece of the bankruptcy’s Plan of Adjustment, the art was taken from the city and given to a new entity for a net present value of $500 million. The chart below does not take into account the city's surrendering ownership of the Joe Louis Arena as part of inducing creditors to agree with the Plan of Adjustment 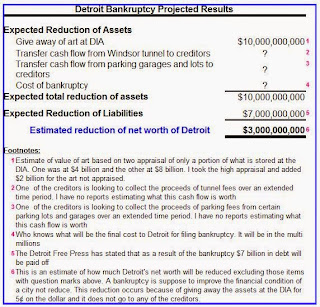 The Press is suppose to be the guardian of truth and justice. The local media that failed included the newspapers The Detroit News, The Detroit Free Press, The Michigan Chronicle, The Michigan Citizen, MLive and the Oakland Press. In addition the local public radio stations WDET and Michigan Radio failed to report that Detroit was being stripped of assets and not receiving fair market value in return. The local television stations also failed to report on the fact that the net worth of the city was less after the bankruptcy than before it started.

In addition, I saw no regular media making any attempt to ascertain exactly what the city was giving up in return for the forgiveness of $7 billion in debt. What was the Joe Louis Arena worth? What was future cash flows from the Windsor Tunnel and the parking lots and garages worth? It seems like the local media was playing along with a game of "Don't Ask, Don't Tell."

I can understand the need for secrecy as the process is going on but the citizens of Detroit now deserve an explanation and answers. It just does not make sense to give away up to $10 billion in assets for $500 million in present value terms.
bankruptcy detroit Detroit Transparency Snyder