Showing posts from October, 2014
Show all

Here is why I am not voting for Rick Snyder and it will be the first time I vote for a Democrat for Governor since 1968, which was the first year of being eligible to vote. It is not because I think Schauer is so wonderful. It is because I remember Richard Nixon. Even though he resigned from office, I believe Richard Nixon did not understand what he did wrong by breaking into the Democratic Headquarters in the Watergate Office Complex in Washington D.C.. President Nixon felt it was in the best interest of the country for him to remain as President and that is why he felt justified in committing the crime we call Watergate. Rick Snyder had a similar attitude about the Emergency Manager Law and when it was defeated by the voters in 2010 he decided legislation was needed to usurp the will of the people. Like Richard Nixon, Rick Snyder is not dumb and coming from the business world where the CEO pretty much controls the Board of Directors, he took it upon himself to correct the “wrong
7 comments
Read More

An emergency management law was needed in the state of Michigan allowing the state to step in and intervene in the management of a subdivision of the state when that subdivision's elected officials are not acting in the best interest of its citizens and endangering the welfare of the remaining citizens of the state. Michigan has done this with Detroit and other cities and school districts. There appears to be a serious flaw in the law. The consultants put in place, including the Emergency Manager, have the power to make decisions that affect the municipality's ability to function for years to come. In some cases these decisions may be detrimental to the long term interest of the citizens and the viability of the municipality. Consultants are used all the time in business when an organization lacks the expertise or resources to address an issue. In the private sector the consultant reports to the owner of the organization or a representative of the owner. This does not appear t
1 comment
Read More 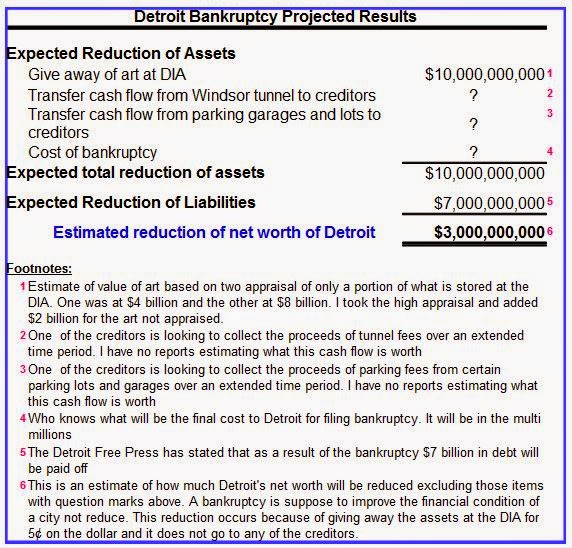 Is this how the Grand Bargain helps Detroit? With this kind of help who needs enemies? ** Revision October 17, 2014 There are additional assets being surrendered by the city, such as the Joe Louis Arena, that are not accounted for in the above analysis. This will decrease the city's net worth further.
6 comments
Read More

Whenever I am involved in making major decisions I keep in mind the overlying objective. In the case of Detroit's bankruptcy the major objective should be to put the city in the best possible financial position in order to bring back the vibrancy of the city serving the needs of its citizens and helping the city grow and prosper. I am having a difficult time understanding how the Grand Bargain by giving away $10 billion of city assets in return for 5¢ on the dollar helps accomplish the above objective. Here is a list of possible reasons and if anyone has additional thoughts please let me know. 1. The decision makers wanted to help the retirees and in order to do this they needed to raise $880 million and the only way they thought they could do this was to surrender the ownership of the art worth $10 billion. In the process of trying to save the art they lost sight of optimizing the financial position of the city. 2. When the major donors of the DIA caught wind of the bankru
3 comments
Read More

The proposed Grand Bargain misuses the assets stored at the DIA and owned by the city. The art should be sold and better utilized for the future prosperity of the city and ultimately its citizens. The reasons given for the need to keep the art intact is summed up by Rip Rapson, president and CEO of the Kresge Foundation: "It is an inseparable part of the city's history, It clearly generates enormous international attention to the city's standing as a place of cultural importance...And it is one of those sort of defining institutions of Detroit life." No doubt this is true, however if the purpose of the Grand Bargain is to save the city, and not just the DIA, the question not asked is whether there is a better use of the funds tied up in art at the DIA that would better add to the quality of life of the city's residents. Orr and his army of experts seem to have lost track of the purpose of Chapter 9 bankruptcy; save the city and make it a better place to live
1 comment
Read More

Grand Bargain and how not to avoid high legal cost 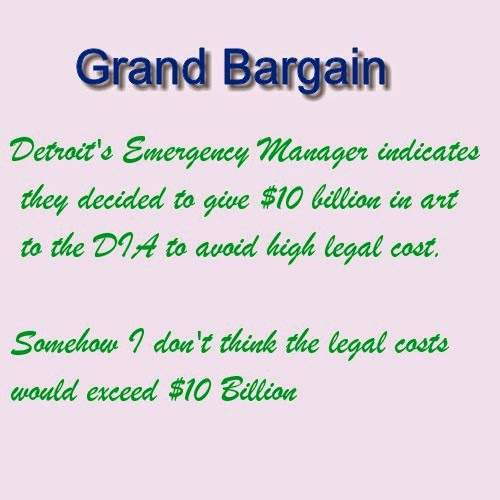