Gaza from the view of one Israeli

- August 02, 2014
Gordon Levi, columnist for Haaretz (Israel), talks about his coverage of the Israeli occupation of Gaza over the past two decades. He spoke at an event held at Columbia University in 2010. He speaks of the conflict with Gaza from a different perspective and it is worth listening to the first 42 minutes of the video clip below.
Prior to becoming a writer Mr. Levi was in the Israeli army. Below is a summary of some of his perceptions. 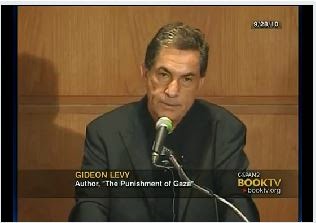 * Palestinian citizens of Israel are deeply discriminated against.

* He questions who is the "super power" in the relationship between Israel and the United States. If the U.S. was willing to stand up to Israel it could solve the problem in the Middle East

* Mr. Levi describes the average citizen of Israel as "blind to the problem" of how their country treats Palestinians, including those who are citizens of Israel.

* Israeli citizens are in a comma relative to acknowledging how its government views the Palestinians.

* He paraphrases Golda Meir, the 4th Prime Minister as saying that after the Holocaust Jews have the right to do whatever they want and she would never forgive the Arabs for forcing Jews to kill their children.

* The attitude of the Jews towards Palestinians is the same as it was during the 1948 ethnic cleansing.

"During the 1948 Palestine war, around 720,000 Palestinian Arabs out of the 900,000 who lived in the territories that became Israel fled or were expelled from their home." The Ethnic Cleansing of Palestine.