The odds are 99 to 1 to overturn Citizens United. Nothing will change until the 99% truly decides to take action, as opposed to just complaining about it, The money faucet of the 1% continues to make a mockery of democracy.

Why is there no will? The same with the press. To give the appearance of concern they place an article in their newspapers to can claim they are looking out for the rights of the little guy. Bunk.

The media is a big winner from Citizens United (CU). 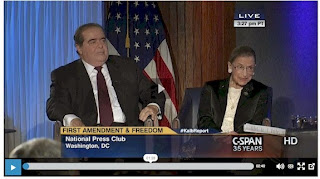 The obvious beneficiaries of CU are the oligopolies of our industries. Instead of being a country where the motto is "1 man, 1 vote" we have quickly evolved where it is now "1 dollar, 1 vote".

Our elected officials are not keen on amending the constitution to reverse CU. They receive much of its bounty. There is the cadre of pollsters, speech writers and political consultants that bare much of the fruit from CU. When you have more money you find ways to spend it.

Further, let's not forget the additional attorneys, accountants, video production professionals and speech writers that have increased their wealth as a result of CU. Most of all let us not forget the media.

"...the biggest industry beneficiary of campaign spending is any business that works with broadcast media," said David M. Mason, a former FEC chair .... "It's always been advertising for as long as we've really had good data on election spending." CNN, The Billion Dollar Election: Who Got Paid November 9, 2012
More