- February 08, 2014
It would be interesting if citizens in Detroit set up a shadow school board for the Detroit Public School system (DPSB). There are many citizens who are upset with the present board and the Education Assistance Authority.(EAA). The focus of this shadow board would be constructive rather than challenging the DPSB and EAA at every turn. The best result would be attained if the current board supported such an effort and contributed to the likelihood of something positive coming from such a group. The group's focus should be on making up a to do list and not a wish list.

This shadow board would require a lot of effort from its members with no pay. I envision it focusing on a 10 year plan wherein the objective would be for the school system getting results equal to or greater than the top 20% of school districts in the state. One prerequisite would be the proposed plan must be realistic. The plan would take into account financial and social/economic realities. More than anything else, the success of such an effort would require sweat and tears of the volunteers.

I suspect that the group benefiting the most from such a plan would be parents having children who are in the 8th grade or below. A school district cannot turn around in a year or two. It will take effort and time. This shadow board cannot be just made up of career educators. Parents must be the core participants. Their families have the most to gain or lose. Educators and other professions need to be included to add their expertise, but the core group must be parents of children that will be in the system. 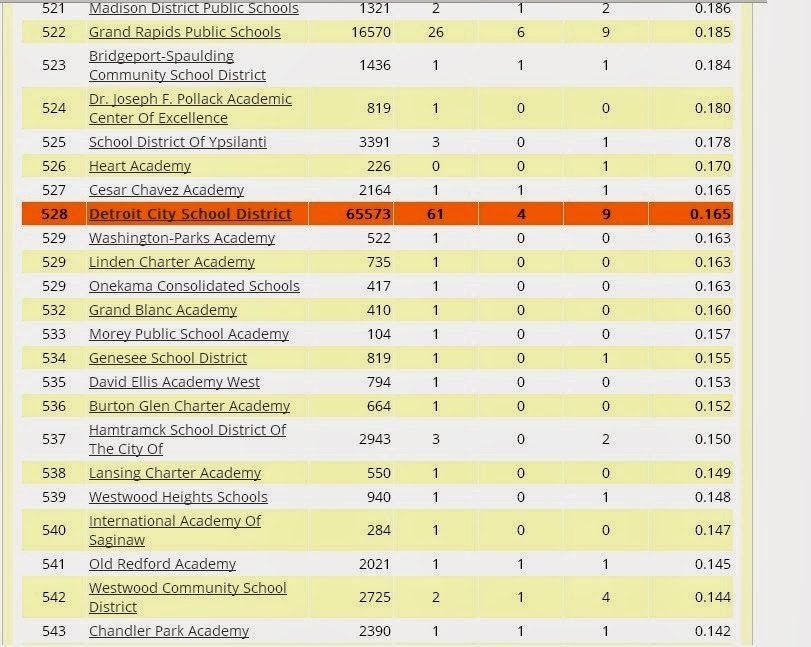 There is no reason why DPS cannot be turned around. It will take effort and hard work. Are the parents of the city's children ready to put their shoulder into it?

** Update. Here is a more current version of the rankings from School Digger. Detroit is ranked 537th for school year ending in the summer of 2013.
detroit education