- July 23, 2013
Happy 100th birthday Mom. It seems like only yesterday that you left us even though it is almost a quarter of a century ago. I bet you were surprised when Dad showed up to be with you in heaven five months to the day, to the minute when you died. 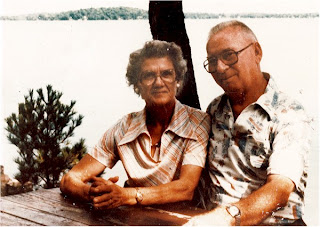 Ozzie and I were very surprised. When we were with him he seemed to be doing OK, but after his death his neighbors said he was always saying he was going to be with Laura soon. He really missed you. During the last several months of your life you went through hell. You are probably aware that when you were in the hospital those last 30 days Dad was attending to you everyday from 7 AM until 11 PM when the nurses would force him to leave.

At first the nurses looked at Dad as a pain in the butt. He was always looking over their shoulder when they would give you a shot, taking your temperature or whatever. When he was in the room alone with you and if he thought you were uncomfortable he would go to the nurses station and demand they take a look at you and do something.  When they changed the sheets on your bed he would watch them carefully and fix them if they were not perfect. In other words he was a pain in the ass to them.

After a week or so the nurses started to really appreciate and respect Dad for the adoration he had for you. They realized it was all about love and they looked after him.

By now most of the memories I have of you and Dad are pleasant ones and you guys were great parents. Dad was the ever working bread winner and disciplinarian. You were the protective Mom who did everything possible to nurture and take care of us. Ozzie and I sometimes look back and are amazed at how humble of a living we had back then and did not realize it because of all the love both of you gave to us every minute of everyday. We shake our heads at the fact we grew up in an old 600 square foot house on the north end of Flint with Ozzie & I sharing a double bed all the way through high school. LOL!

I remember in high school how mad Dad got at me because he thought John Grygowski and I stole Gary Black's car because his Mom called the police. We actually were playing a joke on Gary and we were pushing his car for about a mile back to our house and paused at Carol Baberacki's house to talk to her because I had a crush on her. As I an sitting there Dad speeds by, sees me , slams on the brakes, backs up and says get in the car. He drives me home and tells me to go in the bedroom. He comes into the room and before he says anything hit me with his fist in my mouth decking me. LOL! I guess you might call that tough love.

After he learned what we were actually doing with the car he laughed and was fine, but he never apologized and there was no need for him to do so. I knew he felt bad.

Sorry for rambling Mom! I just wanted to say I miss bought of you,  love you and thank you!!