Showing posts from June, 2013
Show all

- June 21, 2013
Whether Detroit has a bright future may get down to if its employees and retirees refuse to take cuts in their pension contracts. When an entity like Detroit goes through reorganization because of poor financial condition the pain must be fairly distributed. If it is not, Detroit will continue to sputter along and never return to greatness. In this case the major parties include the creditors, labor, the City's citizens, retirees and business. All must be treated fairly. If they are not, the city will collapse under its own weight and continue to whither. Per a report issued by the city of Detroit on June 14, 2013, Detroit's pension plans have unfunded liabilities of approximately $2,8 billion . Either the city has to find funds or lower the benefits going to retirees. If the employees refuse, other areas of the city w ill need to sacrifice or assets must be sold. Selling assets does not solve the problem, it just defers it. Per the above report, "During the year 2
Post a Comment
Read More

Detroit: No Pain, No Gain!

Don't blame Kevyn Orr. He is the doctor that will reduce the pain and cure the disease. Often the cure causes temporary pain for the sake of getting back to long-term health. To ease the pain, assets will be sold including assets held at the Detroit Institute of Arts. One of the reasons for holding assets is for rainy days. Well, it is pouring in Detroit. Don't kid yourself, It will be painful living and working in Detroit for a while. Neglect always catches up with you. Detroit has been neglected for many decades. The citizens of Detroit know putting the city back on course will take time, effort and sacrifice. There will be cuts in pension payments and a reduction in health care. There also will be opportunity. The opportunity will come as the state and country start believing; believing indeed the Motor City is not only going to survive but prosper. The city has a not to be replicated riverfront, it is the centerpiece for this country's manufacturing base,
3 comments
Read More

Snyder Needs To Be Publicized

- June 13, 2013
I like many of the things Snyder is trying to do; however he needs a lesson in adapting from the private to the public world. Snyder definitely has a problem with rules associated with being in public office. He implemented the EAA before it was procedurally and financially ready and they did a sloppy job in applying for the grants desired. The EAA needs to be put on hold until this is under control. Now it appears he misstepped in the process of hiring an Emergency Manager for Detroit. If you think about it logically, it does make sense to make a list of potential candidates and interview them prior to making an offer. The problem appears that once again the Governor failed to follow the rules. Personally, I believe Snyder made a good choice in Orr. Orr is taking much heat and handling it well. I hope the citizens of Detroit start supporting him more. He is looking out for their best interest. Unfortunately he will not be able to protect them from all the pain, but it wi
Post a Comment
Read More

- June 13, 2013
The objective should be more than getting creditors off the cities back. The goal is to get the city on a trajectory where the municipality provides excellent services to its citizens and, with cooperation from the private sector, begins to grow and prosper. This is why Detroit's citizens and its suburban neighbors should be in favor of selling assets and I believe the best assets are those stored at the DIA. They appreciate in value and they do very little to improving the life of the average citizen in the city. It will not be necessary to sell all of the artwork and it will not be required to pay down all of the debt. In order for this to be accomplished the city must develop a vision of what is needed to bring about the future desired of Detroit. The plan must be specific with  the implementation of controls and discipline needed to carry out the objective. In order for this daunting task to be implemented, Kevyn Orr should not work in a vacuum. He needs the help
Post a Comment
Read More

- June 09, 2013
As a result of Detroit's financial mess, the most innocent are the ones who may get hurt the most. The average citizen, including the retirees, who were taught to trust their political leaders and did not always understand what was being proposed deserve to be spared from as much pain as possible. Their guilt was being naive and innocently agreeing to what was proposed. Kevyn Orr is making his offer in good faith which means there's very little wiggle room. The creditors will not accept an offer of $.1 on the dollar knowing they have a better chance in the courts.The creditors also know that the city has a significant amount of assets on its books that are recorded at below market value.  The solution will happen outside of the courts and include a combination of the creditors accepting a reduction of the amount owed them by the city, restructuring some of the debt with the city by disposing of assets and reducing some of its services to its citizens. The creditors
Post a Comment
Read More

- June 07, 2013
We live in a time when there is a constant "War on America" from factions in the middle east. During war there always is a compromise between taking steps to protect our country and the lives of its people and protecting civil liberties. We must find the balance. High tech surveillance helped to promptly capture the Boston bombers and maybe prevent another bombing in Time Square. Many are saying the President is infringing on our civil rights. I agree, however the greatest infringement on civil liberties is taking an innocent life. The decision of where to draw the line should go beyond the President and our other elected officials. The subject demands a national discussion that begins now. A part of the discussion must be whether the enemy includes the Muslim faith itself or is it against small splinter groups and individuals within that religion. The American people need to be educated on this issue.
Post a Comment
Read More

- June 06, 2013
The Republicans, and many Democrats, are up in arms about the IRS spending taxpayers money on lavish meetings and "extras" and I agree with them. This was really stupid. Perhaps the IRS should have taken the same tactic as their bosses in the Senate and Congress. Instead of using taxpayers money they should have accepted large "contributions" and "donations" from large tax paying corporations, Tea Party affiliates, Obama's Organize For Action and various liberal big time contributors from Hollywood. If they did they would be collecting money in the same manner that those in the senate and congress do. There is a good chance that the Koch Brothers and Karl Rove would have made a donation.
Post a Comment
Read More

- June 06, 2013
I understand one being concerned about implementing computer based learning in a school. What I do not comprehend is the opposition to change when a school is in the lowest 5% in the state relative to the child's performance. Change is needed; how can it get any worse? Computer based learning has its challenges. How does one spur the students creativity on a computer? If we switch to a computer based learning system, how does one encourage collaboration by students? I have not seen a good computer program that encourages the arts. Should art be ignored? Much of the present innovation in the world comes from the United States. There is a reason why China and other countries encourage their youth to spend some of their academic time in the United States. It is for our ability to think outside the box and innovate and we should not lose it. We need to innovate within these low performing schools and at the same time experiment with computer based learning. Yes we need to
Post a Comment
Read More

Detroit's Need For Liquidity and The Mayoral Race 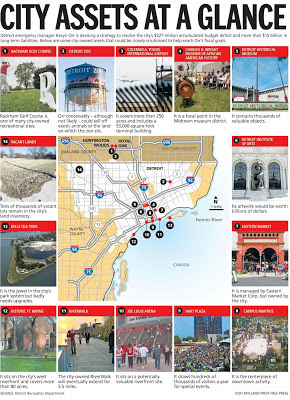 It appears Detroit has more than enough assets to solve its cash flow problems and put itself on solid footing, however there are two significant decisions that should be made prior to any disposal. First , what assets should be disposed?  Below is a graphic from an article in the Detroit Free Press on June 2, 2013 titled, " Detroit Zoo giraffe? Belle Isle? Detroit's treasure trove could be vulnerable to sale to settle debt ", that lists some of the city's major  assets, including the artwork at the DIA and the DIA itself, Belle Isle, Windsor Tunnel, vacant land and homes owned by the city, vacant schools, police and fire stations, Joe Louis Arena, Hart PLaza and many others. Prioritizing these assets for sale to optimize the results is not an easy task. Many factors.must be taken into account including but not limited to:
Post a Comment
Read More

- June 02, 2013
Tea Party like individuals and others are against Common Core because they see it as the federal government stepping in and taking away control of education at the local level. They keep going back to a document written in the late 1700's, the Constitution, and say there is no provision for Federal involvement in education. They are wrong. The Constitution is a living document and it does give the government the responsibility of looking out for the general welfare of the country. In 1800 a formal education was not a necessity to get by in the world. Today, the education of our children is not only necessary for the child's well being; it is also a necessity for the well being of our nation. In the 21st century it is more likely the United States will lose its stature in the world because of our citizens lacking a sufficient education than the country lacking two or three aircraft carriers. Common Core gives the local school district a measuring stick to ascertain how we
Post a Comment
Read More
More posts