We need to implement a plan that reflects our economic reality. The plan needs to incorporate presently investing in infrastructure, research and development and gaining control over our long-term debt problem in the future. The deficit scolds are out there and they are winning the argument for austerity.

Paul Krugman, who coined the phrase "Debt Scolds", and his fellow economists cannot sell the idea of investing now by themselves.The administration needs to step up and play a bigger role in this debate. All of the Presidents time is focused on horse trading with the debt scold followers instead of challenging their intellectual positions. It is as if he is acknowledging the righteousness of their arguments and pleading with them to be merciful.

The result of this tactic will be not whether the scolds win; but rather how much they win and how much damage they do to the economy. It is late in the negotiations, but the President needs to change his approach from one of trying to get what he can to one of focusing on the damage being done by the scolds.

The economists who believe in investing in our future are fighting a good battle against the economists supporting the austerity plan while Obama is on the defensive where it counts, the real world.

Update: Below is a chart depicting the results of Europe's austerity program that in many areas is less burdensome than that being proposed by Paul Ryan and the G.O.P. 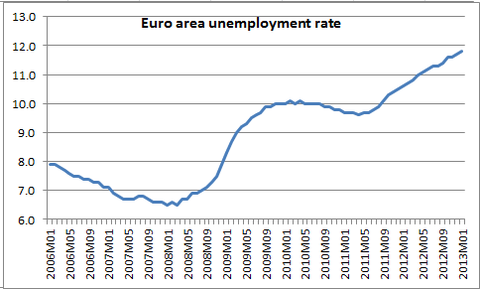 Email ThisBlogThis!Share to TwitterShare to FacebookShare to Pinterest
Labels: economy