Debt and Cutting Off Our Nose

Balancing our budget in 10 years will do irreparable harm to our economy. 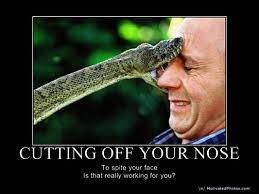 The world will not stand still as we put our fiscal house in order. It is projected by the National Intelligence Agency that China will be the leading economy in the world by 2030, 17 years from now. The NIA goes on to say ""By 2030 Asia will be well on its way to returning to being the world’s powerhouse, just as it was before 1500." I don't know about you, but I want my sons to have a good life.

In the late 1930's and early 1940's we made the decision to go deeply in debt to defend this country from Germany. Today we are under attack economically by China and other countries. We should not be going deeper in debt; however, it is a strategic mistake to cut our debt so quickly that it takes us four or five years to regain our footing. Stretching the debt reduction plan out by 5 or 10 years does no harm, and in fact increases, our chances of remaining the largest economy on earth.

Sometimes I think the G.O.P. does not realize in order for this country to compete in the global economy of the mid 21st century we will need to utilize every resource available to fend off the relative economic rise of countries like China, India, Brazil, Russia and even Mexico. We are not going to win this competition by squandering resources and choking ourselves by paying down our debt too fast... http://lstrn.us/15xUuq2