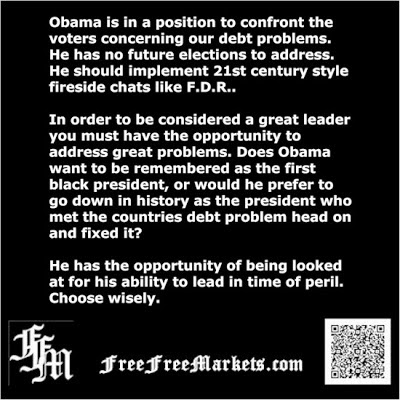 This is in response to the comment below from Lori Filipek. First of all I am flattered by the beginning of your comment where you say,


"I agree with most of your posts and believe you are an extremely thoughtful and reasonable person."

I did review the slide presentation and I encourage all readers to do the same. I try to be reasonable and to remove my personal biases when addressing an issue and I admit sometimes I fail in this quest. Your comment made my day.

I disagree with you that the government must sometimes run a deficit to offset a downturn in the private sector; however, I do agree that many times it makes sense to do so and this is one of those times. You are right that "We are wasting our most valuable resource—people!". The problem is that in the last half century we have run deficits in good times and bad and this is not prudent.

According to the Congressional Budget office Public debt as a percentage of gross domestic product was around 38 percent in 1965. It is around 74 percent now. Debt could approach a 90 percent of G.D.P. in a decade and 247 percent of G.D.P. 30 years from now.

I believe we need a realistic plan to avoid this from happening. I agree the front end of that plan needs to include investing in infrastructure, research and development end education. This will not only help us to be more competitive in the future, but also provide jobs which will help us grow and avoid another recession.

Further, the plan must include making adjustments to avoid the calamities that the CBO is projecting in the future. We are running out of time if we want to remain the dominant economic power in the world. China is catching up with us. Long term planning for us is up to the next election cycle. For China, it is the next 50 years and beyond.

Our defense budget is equal to the next largest 13 largest defense budgets in the world. China's defense budget is a little over 20% of ours. We need to cut defense and spend more on the resources you mentioned in your comment below; the young girl living in Detroit in poverty who has the possibility of being the next Einstein. We must help her do this not just for her sake, but for the sake of the nation.