There is much debate about whether the tax rates should be kept low or raised. This is the wrong debate. Instead we should be deliberating whether we need to reform our economic system. If our markets were free of oligopolistic control we would have a wider distribution of income and income taxes with the result of more tax revenue going to the government with lower rates.

The republicans speak with pride how the free market system is the best economic model for increasing the living standards of the nation and the citizens of the country. They resolutely  proclaim that government needs to cut back on regulation and allow the free market to work. This is hard to argue against.

Below is a chart comparing tax rates and percent of taxes collected in 1979 to what Congress passed during the "Fiscal Cliff" crisis. As a result of these changes 99.3% of households will not experience any changes in their income taxes. The top 20% will be paying 68% of the federal taxes collected, compared to 55% in 1979. 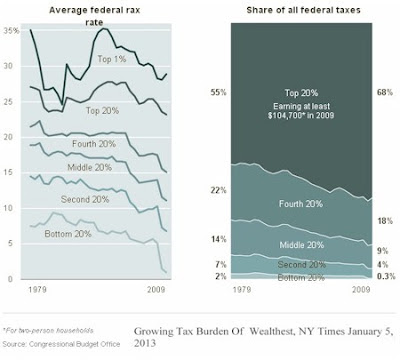 I do not understand why most free market advocates are not up in arms over industries being taken over and controlled by a small group of firms.

The founder of the concept of free markets said:

‘People of the same trade seldom meet together, even for merriment and diversion, but the conversation ends in a conspiracy against the public or in some contrivance to raise prices", Adam Smith, The Wealth of Nations, 1776

The quote below is from the book Capitalism and Freedom written by Milton and Rose Friedman. Dr. Friedman is the economist who is quoted most often when conservatives are praising free markets and capitalism.


"But we cannot rely on custom or conscious alone to interpret and enforce the rules; we need an umpire.These then are the basic role of government in a free society; to provide a means where we can modify rules, to mediate differences among us on the meaning of rules, and to enforce compliance with the rules on the part of those few who otherwise would not play the game."

For whatever reason, this part of  Dr. Friedman's philosophy is never mentioned when it comes to making "free markets" work.

Lack of freedom in the markets corrupts markets. It makes them inefficient. This lack of freedom causes prices to rise, less innovation, egregious salaries at the top and skewed income distribution, less competitiveness in markets and last but not least, consolidation of political power.

This is a major part of the income equality problem that is seldom discussed.