- January 29, 2013
There are now two layers to the sub-prime mortgage scandal that brought down our economy; those who committed the act and those who are covering it up. Why are the culprits not being required to pay compensation to those whose net worth was drastically reduced as a result of the reckless profiteering by Wall Street and large commercial banks?

It is disturbing there was no significant investigation and criminal or civil action against individuals and organizations that contributed to the housing crisis and thus our economic collapse. The fines assessed against some entities are looked at as "a cost of doing business". Some of the individuals who have been looking the other way held, and presently hold, senior positions in our government. Is there a conspiracy to cover up any wrong doing on the part major banks, wall street firms and their employees? The individuals needing to supply answers include:

Barack Obama: President Obama was not in office as the crisis occurred; however, why has he not aggressively pursued obtaining retribution from the culprits that contributed to this economic crisis? He bailed out Wall Street and big banks while very little was done for main street. Was it because of the significant campaign contributions he received for his 2008 run for president? Below is a chart showing contributions Obama received for his 2008 campaign of almost $3.5 million from Wall Street while only $658 thousand was received in 2012. 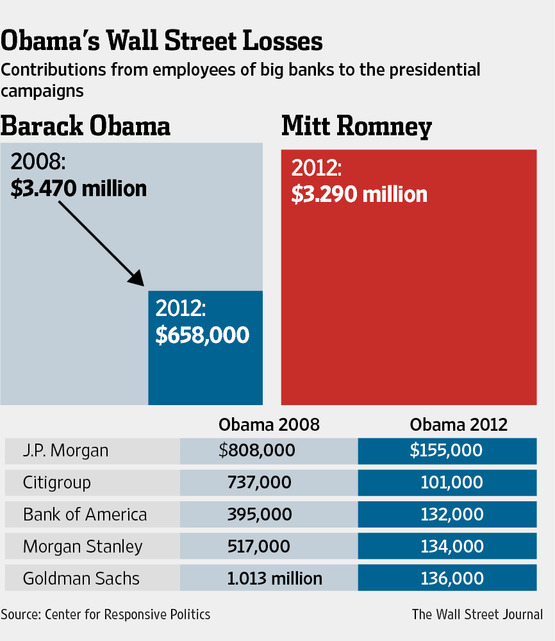 In 2008 could it be that Wall Street was hoping to buy his cooperation so he would not aggressively pursue criminal action against them? While during the 2012 election maybe they did not want him to remain in office without worrying about raising funds for his next election.

There was some legitimacy to not pursuing Wall Street and the banks in 2008 and 2009 in that it would have caused the crisis to worsen. We are past any further eminent danger to the economy. What is the President waiting for? Perhaps he fears that the appearance will be that his hands are also stained. The longer he waits, the more permanent the stain.

Henry Paulson: As the housing crisis was coming to a head, Henry Paulson was the United States Secretary of Treasury and was a leading decision maker as to how to minimize the collapse of our economy as result of the crisis that was brought about by the creation of financial securities backed by sub prime mortgage loans created by wall street. These securities were given a AAA investment grade rating by the rating agencies. These rating agencies received fees from the wall street firms issuing the securities and one has to wonder about this conflict also. If they refused to give the requested rating, perhaps they would never have received the business.

Prior to becoming our Treasury Secretary in July 2006 Mr. Paulson was the CEO of Goldman Sachs, one of the largest issuers of these toxic mortgage securities.


Per Wikipedia, "During the 2007 subprime mortgage crisis, Goldman was able to profit from the collapse in subprime mortgage bonds in the summer of 2007 by short-selling subprime mortgage-backed securities.... The pair, members of Goldman's structured products group in New York, made a profit of $4 billion by "betting" on a collapse in the sub-prime market, and shorting mortgage-related securities.... The firm initially avoided large subprime write downs, and achieved a net profit due to significant losses on non-prime securitized loans being offset by gains on short mortgage positions. Its sizable profits made during the initial subprime mortgage crisis led the New York Times to proclaim that Goldman Sachs is without peer in the world of finance."

Our government spent hundreds of billions of dollars bailing out Goldman, other firms on Wall Street and large commercial banks. How could Mr. Paulson be objective when the firm he headed prior to joining the Administration financially benefited from the creation and distribution of these securities? As a result he also benefited financially.

Timothy Geithner: In January 2009 Timothy Geithner became the 75th Treasury Secretary of the United States. Previously he was the president of the New York Fed, which he held since 2003. The question remains whether he became "too close" with the big banks and Wall Street firms during his tenure at the New York Fed. Is he too close to the powers in Wall Street to invoke justice? Most importantly was he too close of an ally to pursue the truth about Henry Paulson's involvement with mortgage back securities while at Goldman?

Congress: Where has congress been during this time when serious investigations should have been occurring. For the Past four years the Republican Congress has been attacking anything that started with the letter D. If someone from the Detroit Tigers showed up in Washington they would have been accused of being socialists by the Republicans. Why have they done very little to investigate this conflict of interest and not seeking retribution from the culprits. Is it that the Super PACS and other large contributors control this body of government?

Mitt Romney: Why was Wall Street and the banks contributing to Romney instead of Obama in 2012? As conjectured above, perhaps one reason was that they wanted a President who would be hungry for their contributions in 2016.

Another reason could be related to Romney's refusal to show the details of his 2009 and 2008 tax returns. . He did a lot of business with Goldman Sachs when he was running Bain Capital. It would have been natural for Goldman to recommend to Romney that he invest in these high yield, highly rated mortgage backed securities issued by Goldman. It would also be natural, although, illegal, for Goldman to inform Romney early that these investments were about to be downgraded and he should get out of them. If this were true, the transactions would have showed on Romney's tax returns and it would have been scandalous.

Therefore, if Romney became President, the chances of Goldman ever being prosecuted would be greatly reduced.

We the people deserve answers and retribution. It is important that their be full disclosure as to why the instigators of the sub prime loan debacle have not been required to make retribution.