- December 15, 2012
On December 10, 2012 The New York Times reported on how The National Intelligence Council (NIC) expects the world to change over the next seventeen years.

By 2030 Asia will be well on its way to returning to being the world’s powerhouse, just as it was before 1500. By 2030, majorities in most countries will be middle-class, not poor, which was the condition of most people throughout human history.

Below is a chart depicting the percent of total world consumption of the middle class from the year 2000 to 2050. The countries in blue are India and China. The impact on consumption by Europe and the United States is on the decline. 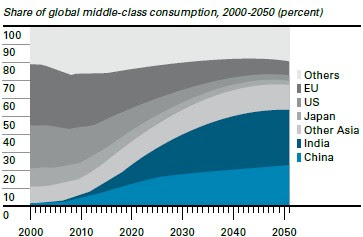 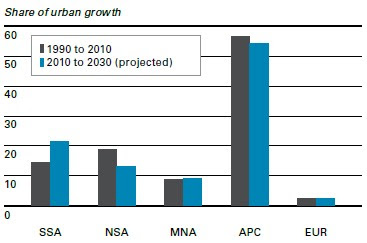 Regional shares of worldwide urban population growth in five world regions: Sub-Saharan Africa (SSA); North and South America (NSA); Middle East and North Africa (MNA); Asia-Pacific (APC); and Europe (EUR). The graph above compares shares during the past two decades (1990 to 2010) to
those projected during the next two decades (2010 to 2030).


If you desire to have your children to have a good life economically in 2030 and beyond, have them focus on meeting the needs of Asia.
2030 National Intelligence NIC

- March 06, 2012
How did it evolve that Hillary Clinton will be the next Vice President of the United States? Simple, it is the logical thing to do. Imagine hiding in the closet in the Oval Office. listening to a discussion between President Obama and David Axelrod, a top political aide to the President. They are discussing the current campaign to be reelected. Obama starts out saying things look more positive then even three months ago. His approval ratings are rising, the unemployment picture is improving, the countries GDP is slowly climbing and the Republicans are beating themselves up in their primary campaign. Further, the Republican base cannot get excited over Romney and therefore they will not be fired up for the election. Obama says, “I could go for a good cigar right about now; however, with my luck just as I light up Michelle will walk in.”
Read More