The United States is under threat of losing its dominant status in the world. We are losing our influence not because of a lack of military power, but rather the relative decline in our economic power. The remainder of the world is catching up and this is particularly true with China and other parts of Asia. The question is what, if anything, can we do about it. 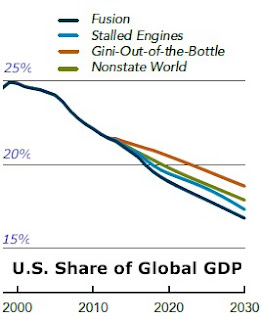 Stalled Engines: A scenario in which the US and Europe turn inward and globalization stalls.


Fusion: A world in which the US and China cooperate, leading to worldwide cooperation on global challenges.

Gini-Out-of-the-Bottle: A world in which economic inequalities dominate.

Non-state World: A scenario in which non-state actors take the lead in solving global challenges.

As shown on the graph to the left, in 2000 the United States share of global Gross Domestic Product (GDP) was just under 25%. The expected share of global GDP for the United States in the year 2030 is in a range of 17% to 19%, depending on which of the above scenarios becomes reality. This is a drop between 24% and 32% in thirty years and the decrease is expected to continue for some time and most likely at an increasing pace.

The expected countries to rise include China, India and Brazil. The NIC is not expecting much from Russia; however, countries in Sub-Saharan Africa, other parts of Asia and Latin America, especially Brazil, are expected to significantly increase their share of global GDP by the year 2030 as pictured in the graph below. 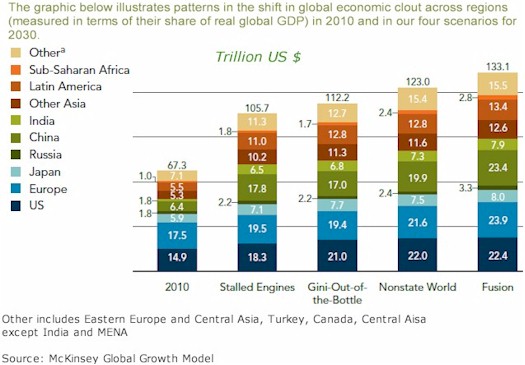 The Solution
We have no control over the population size of India and China, 1.24 and 1.34 billion respectively. Each country has four times as many people as the United States. For much of the 20th century both countries were in poverty, therefore their countries' economy was not much of a factor. Now both countries are developing a middle class and thus their Gross National Product is rising rapidly.
Here is what we must do.
Nurture A Strong Economic Relationship With The Following Countries.

The total population of this trading consortium is almost equal to the separate populations of India and China.

This will not be easy. China and India will not sit ideally by as we nourish these relations. They will be tough competitors. If we pursue these other nations with the attitude they must "follow our lead" and not have much flexibility, we will lose. They may need us; however remember we also need them.

Choosing Europe as a strategic partner was easy; they already are a major partner. Canada and Mexico are neighbors sharing borders with us and for that reason alone it makes sense to have them join the alliance. Canada may be the best friend we have in the world.

Russia is included because our historical cultures are similar and if they are not invited to our party they will be invited by China, They are wrestling with democracy; however they are making progress. It did not take long for Germany to become an ally after World War II

I included Haiti and Cuba for three reasons: 1) They are our neighbors,  2) If we don't China will and 3) It is time we stop "punishing" the people of Cuba because of the countries leadership and it is the Judeo/Christian thing to do. Both countries are impoverished and yet so close to the United States. We have ignored them for too long.

We have the largest defense budget in the world at $711 billion with China having the next largest at $130 billion. Our defense budget is equal to the next 13 largest budgets in the world combined. Our resources are limited and we are in danger of slipping in influence because of economic competition rather than military.

Education is A Key

In a paper published by American Progress titled The Competition That Really Matters they said the following,


"Today, public commitment to early childhood, educational, and technological development in China is accepted as an integral part of a national economic strategy, unlike in the United States. In 2007 China surpassed the United States in the numbers of college graduates focusing on science, math, engineering, and technology fields. Three years later, it became the world’s largest provider of higher education.

If we do not allocate more money to education, and learn to spend it wisely,  we will not be able to slow down the world dominance by Asia. This is where World War III is being fought. We cannot let the black girl in inner city Detroit who has the potential to be the next Einstein go to waste; not just for her sake but also ours.


Get Our Fiscal House In Order
Our expected future expenditures are growing faster than future expected revenues and this is not sustainable. In addition our present unemployment rate is above 10% if we include those people who have stopped looking. Both problems can and should be addressed simultaneously. They are not mutually exclusive. If we cannot get our citizens back to work, we will not solve our fiscal problem.
The plan to get our fiscal house in order must include an upfront investment in infrastructure, education and research and development. These three ingredients are a must if we intend to remain competitive. A portion of the reduction in defense spending should go towards these needed investments. At the same time, such investments will help reduce unemployment.
The remainder of the debt reduction plan should happen over a period of ten to fifteen years. It took us a long time to get into this mess and we will not get out overnight. We have the time, as long as we get a plan now!Any additions to future programs must be offset by cutting into existing programs. It should be no longer acceptable to borrow from future generations to increase current expenses of the present generation.

We are the most innovative country in the world. This did not happen by accident. We spent trillions of dollars on research and development that has advanced society and increased wealth. However, we have allowed other countries, especially China, to steal our inventions with no cost or repercussions. This must stop. Over the last three decades China has benefited by us opening trade with them and allowing them to export goods and services to our citizens. One reason for innovation is to overcome their advantage of having such cheap labor. By allowing them to steal our innovations we have allowed them to neutralize our advantage. This must stop.

The United States has time to do what is necessary to retain its economic strength relative to the rest of the world. In order to do it, we must plan now and implement before it is too late. The window of opportunity is closing.