Showing posts from April, 2012
Show all

Apartments: Should You Refinance 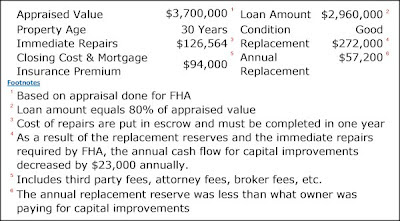 Is it time, or past time, to refinance the loans on your apartment buildings? Using programs offered through HUD, you should be able to get a loan with the following terms. Interest Rate: 3.9% Term: 35-years Personal Guarantees: None Loan-To-Value: 80% Does it sound too good to be true? It might be and in order to make the right decision you need to hire a professional who has expertise in present value analysis. Below is some information on a potential refinance.
Post a Comment
Read More

- April 27, 2012
“When China suddenly began cutting back its purchases of oil from Iran in the last month, officials in the Obama administration were guardedly optimistic, seeing the move as the latest in a string of encouraging signs from Beijing on sensitive security issues like Syria and North Korea, as well as on politically fraught economic issues like China’s exchange rate.  As with so many signals from Beijing, though, its underlying motives for reducing its imports of Iranian oil remain a mystery: Are the Chinese embracing Western sanctions? Or, as some experts suspect, are they trying to extract a better price from one of their main suppliers of crude?” New York Times, U.S. Sees Positive Signs From China on Security Issues , By MARK LANDLER and STEVEN LEE MYERS , April 26, 2012
Post a Comment
Read More

I See! Thank God I See At Last

Recently I witnessed and was the beneficiary of a miracle. Lawrence Hamburger, M.D. , Medical Director of Ophthalmology at the Henry Ford Health System’s Troy, Michigan office led the miracle. Dr. Hamburger led; however, he would not have made it happen without the competent staff in Troy and Sterling Heights, Michigan. I received no compensation for writing these unsolicited comments. Click To Visit Henry Ford I am sixty-six years old and recently Dr. Hamburger performed cataract surgery on my right eye. It went smoothly; I experienced zero pain and very little stress. In fact, my vision in the eye is presently 20/25, almost perfect and I have worn glasses for almost fifty years. If surgery in the left eye has the same result, which is not likely, I will not need glasses for distance. This will not happen.
Post a Comment
Read More

- April 25, 2012
There are few things, if any, that are a better investment for this country than our children’s education. It is time to provide the first two years of college or trade school at no cost and paid by the taxpayer. Public education in this country evolved over time. At the founding of the country, every family was on its own. The country’s’ economy was primarily agrarian and farming was not too scientific with little mechanization. As the country developed and modernized, its economy became more complex and required more skills. In 1647, the general court of the Massachusetts Bay Colony mandated elementary schools to serve all and to teach reading, writing and arithmetic.
1 comment
Read More

Paul Krugman, Nobel Prize winner in economics, predicts short term rates should stay low for some time. The chart below is from a recent blog he did in the New York Times. I am not about to argue with him. Deductively, he is also predicting a slow recovery.
Post a Comment
Read More

- April 21, 2012
"An American official, speaking on the condition of anonymity to avoid disturbing diplomatic relations, said the new financing pledges were not expected to change the voting shares within the fund. The $430 billion in new commitments represent a temporary buffer in case the I.M.F. needs additional capacity in the coming years, the official said, not a change in permanent quota contributions.... The United States has said it will not pledge any more money to the fund, arguing that Europe’s problems are its own to fix and that the I.M.F. has enough spare lending capacity. “Europe is a rich continent,” Timothy F. Geithner, the Treasury secretary, said in remarks at the Brookings Institution this week. Europe has to play “the dominant financial role” in its own crisis, he argued."   I.M.F. Adds $430 Billion in Emergency Lending Ability , New York Times, April 21, 2012 We have a strong relationship with Europe  that China is challenging. Further, the Euro crisis threatens o
Post a Comment
Read More 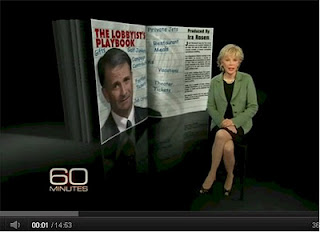 Occupy Wall Street has made this nation aware that our political and economic systems are broken and needs fixing. Jack Abramoff, a former Washington lobbyist and convicted felon for bribing Congress and violating federal campaign laws, does not know how he will pay his $44-millon fine and make amends for all the wrongs he has done. I have a suggestion. Mr. Abramoff has the experience, knowledge and contacts to help OWS bring about the necessary political and economic changes to make America the envy of the rest of the world again. The changes needed include: 1. Prohibit Corporations and Unions From Financing Political Campaigns by Amending The Constitution 2. Enforce Anti-Trust Laws against Oligopolies & Monopolies! 3. Bring Our Debt under control and amend tax code!
1 comment
Read More 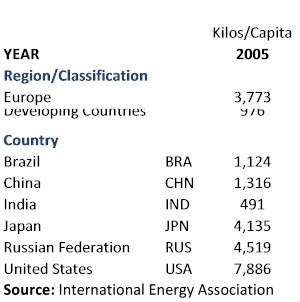 We should not be overly concerned whether gas prices will be $5 per gallon soon. Prices are dictated by supply and demand and demand is rising. Our concerns should be which presidential candidate will implement the best energy policy for future generations and us. World-wide demand for oil will be increasing dramatically as demonstrated below.. The policy should factor in the sources of energy and the affects on the environment. After all, it is our children and grandchildren we are discussing. Procuring sufficient energy in the future will be much harder. The population of the planet is growing and other countries are becoming more affluent and thus consuming more, including energy. Below is a graph of the amount of oil consumed per capita by country.
1 comment
Read More

Why Is Unemployment high?

- April 07, 2012
Why do we have such high unemployment? If you talk to ten economists, you will get fifteen answers. Let me give you answer sixteen. Congress has refused to pass an adequate stimulus package and a plan to control our nation’s debt problem. A stimulus package would increase jobs while building and repairing infrastructure to compete better in the future. Passing a plan relating to our federal debt would brighten the outlook for the country and improve confidence. Congress says it wants to reduce debt; however,it refuses to raises taxes on the wealthy. We need both a stimulus and a long-term debt plan.
1 comment
Read More
More posts