Stimulate, export, cut deficit and military and restore equality are all related..

We are in the fourth year of a Great Recession that could have been a depression. The end is still not in sight. The net worth of all Americans was affected negatively, as has their optimism and willingness to go on spending binges as they have over the last several decades. To make the recovery happen, part of the answer is to stimulate our economy by investing in our future including infrastructure, education and the internet.

Our ability to presently stimulate is somewhat limited by the debt burden our country is currently carrying as depicted by the chart below. If we cannot show how we can afford to stimulate now and implement a debt reduction plan in the near future, we could be facing the same problems as Greece, Spain and Portugal. 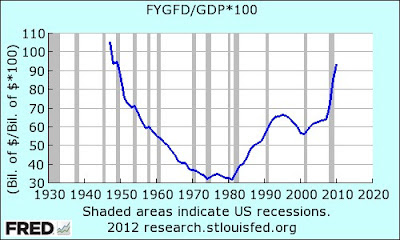 Ccircumstances after World War II , when we were the last modern economy standing, no longer exist. We were ready to convert to a peacetime economy and ready to help the remainder of the world to rebuild.

Today there are many nations in the world competing for the same consumer. Further, the American consumer is not willing and able to consume as he did in the past. He cannot use the equity in his home as a piggy bank. Restraining the consumption binge is a good thing; however, it means that we must find another engine for our growth rather than the American consumer.

The new engine is exports. The rest of the world is rushing to catch up to our life style and wealth. They want to consume and someone is going to fill their desire. People throughout the world are looking to increase their consumption of goods and services. If we do not meet this demand there are other nations clawing to fill their needs. These consumers are in China, Iran, Brazil, Russia, Southeast Asia, India, Pakistan, Eastern Europe, South and Central America, Africa and the list goes on and on and on.

Exports will only work if there is indeed free trade with the rest of the world.

Romney is right. Today China is not practicing free trade. China is artificially keeping its’ currency low. As a result, it is more expensive to buy goods from the US then it should be. Chinese goods for Americans are artificially cheap. This results in Americans, and the rest of the world, buying more goods from China then they would if the Chinese currency was valued to the market. At the sme time, our goods and services would be cheaper for the Chinese consumer.

The US has been weak-kneed on this issue. If we are going to get back to prosperous times, we need to address the currency issue. This is not going to be easy. China is a major creditor of ours. We all know how much power and influence our lender has over us in our personal lives. China has that same influence over us as a nation.

Other free trade issues need addressing. For example, Japan places a very high tariff on cars that we export to Japan. This also has to change.

After World War II, the United States defended the free world at great financial cost to this country. We also assisted the free world in getting back on its economic feet. That was then; this is now. We are proud of what we did to help the world to recover from the devastation caused by World War II. We were equally proud of what we have sacrificed to help our allies get back on their economic feet. What we did defines who we are. We are a caring, loving and giving people. We would not want it any other way.

Many of the countries that we have helped, both economically and defensively, are now some of our biggest economic competitors. If we want to prosper, we can no longer subsidize their defense and accept unfair trade restrictions. It is unfair of them to expect us to continue doing so.