Depressions Do Not Happen In A Day!

Obama is getting blamed for the high unemployment numbers and our current economic downturn when in fact we should be pointing our finger at the Bush administration. The country's eyes were taken off the economy by the disaster of 911 and it was exasperated further with the unjust war in Iraq.

This is a Bush depression that has its roots in the early part of the last decade.

This depression did not happen in one day. It evolved over time. We presently have an unemployment rate of 8.5%, compared with a rate of 4.2% in October 2008. 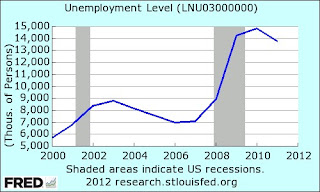 Below is a graph showing unemployed from 2000 to the present. In 2007 roughly 8 million people were unemployed. Today the unemployed total 14 million. If we take into account that many of the jobs created from 2000 forward were related to the housing bubble caused by the sub prime mortgage scam, another 2 million jobs were artificially created.

Has Obama made mistakes? Of course he has and much of it was due to a lack of experience. One of his first mistakes was tackling the health insurance issue too early and not getting directly involved in the debate for almost a year. Another was he spent too much time trying to compromise when his opposition had no desire to compromise. This was especially evident with the deficit discussions and the need to raise the debt ceiling.
Depression obama recession unemployment