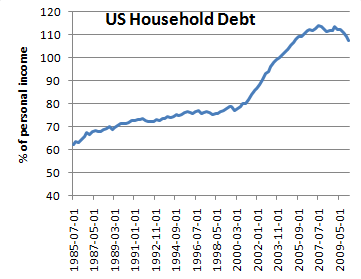 We need to adjust our style of life, both as a nation and as citizens. The government and households have huge debts and this will choke us unless it is addressed. We can no longer live by plastic; credit cards and other debt.  The chart to the left was taken from a post of Paul Krugman, which he obtained from the Federal Reserve depicting the explosion of household debt.

However, now is the time for the government to develop a credible plan to reduce our nations debt over the next decade, but not to implement it until the economy, including jobs, is on a stronger footing.

We need the plan now; not later. The world, including myself, has doubts that we have the desire and fortitude to develop such a plan; let alone implement it. The immediate development of the plan is a critical part of us continuing to recover from the economic calamity of the last few years. The world needs to know that we are going to do something about our swelling debt load and they can still have confidence in us to solve our problems.

As individuals we need to hang on to that born again trait called frugality. As the economy recovers we need to guard against the "live for today" attitude of the past couple decades. We also must face reality that we are the government and part of the "deficit fix" discussed above includes all of us making sacrifices. The measures that must be considered as part of the plan include:
Washington, give us a plan.
adam smith economy free markets free trade friedman monopolies recession stimulus